The big news this year is all about two wonderful vintages of Chardonnay, being the 2010 and 2011. As I mentioned in the tasting notes, the 2010 Chardonnay is the first to be completely fermented and aged in our underground maturation cave. I am beginning to see a real difference in the wines that have been fermented in the cave. They seem to sail through almost two years of barrel age retaining beautiful freshness and vibrancy. With humidity always over 90 percent and a relatively constant temperature of 15 degrees we are finding the ageing process is now much slower and more gentle – under these conditions the wines tend to lose a small amount of alcohol and gain further refinement, rather than gaining alcohol as they do in a less humid cellar.

The 2011 vintage was one of the coolest for many seasons with much higher than average rainfall thrown in for good measure. Due to the challenging conditions many regions had high losses due to Downy Mildew and Botrytis. While we also had our fair share of these conditions, careful vineyard work enabled us to keep this mostly under control. This season has resulted in exceptionally fine wines though they have still retained good depth and complexity. The only disappointment was Pinot Noir and the 2011 may be offered under our McClay Road label at a later stage, depending on how this wine develops in barrel.

The Shirazes have lived up to expectations, in fact the 2010 Estate Vineyard Shiraz has continued to improve in terms of complexity as this vineyard becomes more established. While the cooler 2011 vintage has resulted in a finer structure at this stage I expect that by this time next year they will have richened and deepened considerably.

2011 will be the first vintage to show the results of some improvements in our red winemaking techniques. Without going into great detail this includes a little more use of whole bunch fermentation in some cases. This will be further enhanced in the upcoming vintage with the replacement of some of our winery processing equipment - with the very latest machinery  developed in Narbonne, Southern France.

For those of you who are Pinot Noir fans, our new small planting of MV6 Pinot Noir vines is progressing well. This planting will help boost our production slightly and hopefully bring an extra dimension to this wine within the next few years.

Many of you will have seen reviews of our wines in the March and November issues of Decanter Magazine this year. We were very pleased to receive a top equal rating for the Estate Vineyard Chardonnay in what was a very comprehensive tasting of 116 wines! The Warner Vineyard Shiraz also ranked well and we noted this as the top cool climate Shiraz with a total of 256 wines being tasted. If you have not already seen these issues I recommend them as very interesting reading.

Some of my comments in the most recent issue of Decanter discuss various aspects of the Australian wine industry and Australian wine styles. Although they will have been considered controversial by some I'm glad they have found resonance with most of you.

"This challenges Giaconda’s Chardonnay for top ranking in the stable; it has an utterly seductive mouthfeel..."
James Halliday, The Weekend Australian Magazine 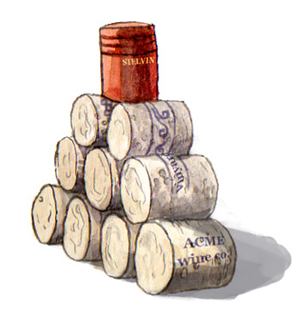 Cork or screwcap wine? Even age cannot settle this debate

There are two glasses of 2006 Giaconda chardonnay in front of me (lucky me...). One is very youthful, a pale straw colour, lean and powdery, with a hint of reductive, sulphidey struck-match scent, and a refreshing, lemony acidity. The other is a touch more golden, a little more developed and rounder in flavour, with slightly richer, toasty, spice and button mushroom aromas.

What's going on? Are these wines from different parts of the Giaconda vineyard? Made in different ways? Matured in different barrels?

Nope. They're both exactly the same wine, bottled at the same time, cellared in the same place (underground at Giaconda, in a tunnel dug into the stone of the hill). And yet these wines undeniably taste different. So what sets them apart?

It's been almost two decades since the Australian wine industry started using screwcaps en masse. Today, almost all wines out there in bottle shop land are sealed this way. And yet there is still ongoing debate about the suitability of a screwcap for fine wines destined for long-term cellaring: yes, we know the seal works perfectly well at keeping the liquid in the bottle and keeping it fresh, but we just don't have enough experience comparing the same wine under cork and cap over many years to be sure we like how the wines age the new way.

Which is why, when Rick Kinzbrunner and his winemaker son Nathan, of legendary Beechworth, Victoria producer Giaconda, held a recent tasting comparing their chardonnay, pinot and shirazes from 2004 to 2010 bottled under both seals, I was keen to attend.
So many factors

The results? Inconclusive, I'm afraid. For a start, there are so many variables at play, it's almost impossible to be definitive. In the case of the 2005 chardonnay, for example, the screwcap unequivocally outshone the cork – but Rick told me all the corks he bought that year were far from perfect.

In some cases the peculiar nature of the vintage overrode any differences between the seals: both the 2008 Warner vineyard shirazes, for example, showed the softer tannins and globby fruit of the reds from that warm vintage more than they showed anything else.

And while I tended to prefer the cork-sealed chardonnays, particularly the 2006 mentioned above and the outstanding 2008 and 2010 wines, I tended to prefer the screwcapped reds (the 2006 Warner shiraz sealed this way was utterly entrancing, an intense and spicy shiraz at a lovely stage of its maturity). That said, the magnificent 2010 Estate shiraz, under cork, was my pick of the reds: the best shiraz Giaconda had produced up to that point.

This aspect – personal preference – is possibly the most important factor of all. Rick Kinzbrunner tended to prefer the screwcaps for his chardonnays. He liked the way the seal retains the youthful, reductive aspects of the wines; whereas I'd liked the way the corks led to the slightly rounder, more developed flavours I would traditionally associate with bottle-aged chardonnay. And he's not so much of a fan of screwcaps for reds. He doesn't like the way they mature. Indeed, he's decided to bottle his shiraz only under cork.

After the tasting comparison of Giaconda's chardonnay, pinot and shiraz, the Kinzbrunners also opened a magnum of their 2008 nebbiolo – under cork, of course. And it turned out to be my favourite wine of the day: deep wells of entrancing perfume for the nostrils to explore and beautiful poise on the palate, with skeins of brick-dusty tannin falling like a lattice across the tongue.

If you're a fan of this great Italian grape and the wines it produces, and you like the character of those wines after a few years in the cellar, you really need to put Giaconda high up on your nebbiolo shopping list.

Self-effacing Rick Kinzbrunner, one of the demigods of Australian winemaking, is continuing to ask as many questions as he did when he established Giaconda in 1985. Indeed, the questions began 15 years earlier, when he set off on a 10-year odyssey around the world having graduated in mechanical engineering.

He moved to California to study oenology at UC Davis, working at three leading Californian wineries and doing a vintage at Chateau Petrus. On his return to Australia in 1980 he had a stint as assistant winemaker with Brown Brothers and purchased his Beechworth property in 1982, planting chardonnay and the Bordeaux varieties he had worked with in California and France.

Unknowingly he followed Phillip Jones at Bass Phillip, both removing cabernet and co, replacing them with the varieties that have since made them justly famous. Kinzbrunner’s unorthodox (at the time) fermentation techniques with chardonnay resulted in the 1996 Giaconda, a giant of extraordinary complexity, still awesome today. He has used an organic vineyard regimen (and some biodynamic trials), but they’re under evaluation. In 2008, he employed his engineering knowledge to blast an underground wine cellar out of solid granite. He now uses gravity flow in a winery with an unchanging year-round temperature.

Satisfied? No, he’s still asking questions, now about closures. He recently staged a three-dimensional vertical (vintage), horizontal (variety) and closure (screwcap/cork) tasting involving chardonnays, pinot noirs and shirazs from 2004 to 2010. He has bottled experimental parcels under both closures to watch their development, and opened the door to a select few tasters in February. There’s no debate about chardonnay: it’s screwcap, as is pinot noir. With shiraz, it’s a choice between high quality natural cork and screwcap. For the time being it’s cork.